Select Fusion I2C capable devices support at least two I2C communication ports (Port 0 and Port 1).  Port 0 has a fixed communication rate of 100 kHz and may be used by NCD devices that contain integrated sensors, I/O Expanders, or other types of I2C devices.  Though we may allow access to Port 0 on select controllers, Port 0 should generally be considered for use by the NCD products and peripheral devices.  For instance, we may offer expansions that offer additional features by utilizing Port 0.  Port 0 is typically accessed using the FXR Relay Expansion Port.  I2C Port 1 is for general use by our customers.  Port 1 is available for on AD8 Port 1 (shared with UXP Port 1) using I/O Lines 1 (SDA) and 2 (SCL).  I2C Port 1 can be tuned for faster or slower speeds.  Slower speeds allow Fusion controllers to communicate I2C data over longer distances while faster speeds offer greater compatibility.  The Up/Down Jumper for AD8 Port 1 should be set to the “UP” position when using the I2C communication features.

Fusion I2C Port 1 supports 500 Hz, 1 kHz, 10 kHz, 50 kHz, 100 kHz, and 130 kHz communication speeds (which has all been precisely timed with an oscilloscope), and supports I2C device clock stretching, as required by the I2C communication protocol (a feature often skipped by most I2C implementations).  Development of the I2C communication routines were centered on a 24LC515 Non-Volatile EEPROM, and has been tested with various I2C sensors to prove functionality.

Use of I2C communication functions on Fusion series controllers require prior knowledge of I2C, as it is outside the scope of our documentation to go into a detailed explanation of the protocol.  Here we will focus on the data exchange between a computer and the Fusion controller.  The Fusion controller will manage the data exchange with the I2C device, greatly simplifying the amount of information that must be studied.

When working with I2C for the first time, it is helpful to use the 24LC515 EERPOM connected to a Fusion controller.  The 24LC515 demonstrates 2-way communications with the device, showing you how to read and write data as shown in the sample provided in Base Station software.

To date, all I2C devices we have tested are compatible with Fusion I2C communication routines.

For complete details on the I2C protocol, there are many resources available on the internet, some of which have some very good descriptions of the protocol.  Most of the detailed protocol information may be skipped when working with a Fusion controller as the difficult part of communications is completely handled by our firmware.  Even so, there are a few things you need to understand before you can successfully implement communications to an I2C device:

NCD Fusion controllers have adopted the same loose standard as Arduino and other microcontrollers that support a 4-pin latching header with pins 1-4 offering the following interface connections:

NCD Base Station Software includes an I2C control panel used to demonstration communications to various popular I2C devices.  The control panel shown below may look a little intimidating at first, but it is about as easy as we can make I2C communications. 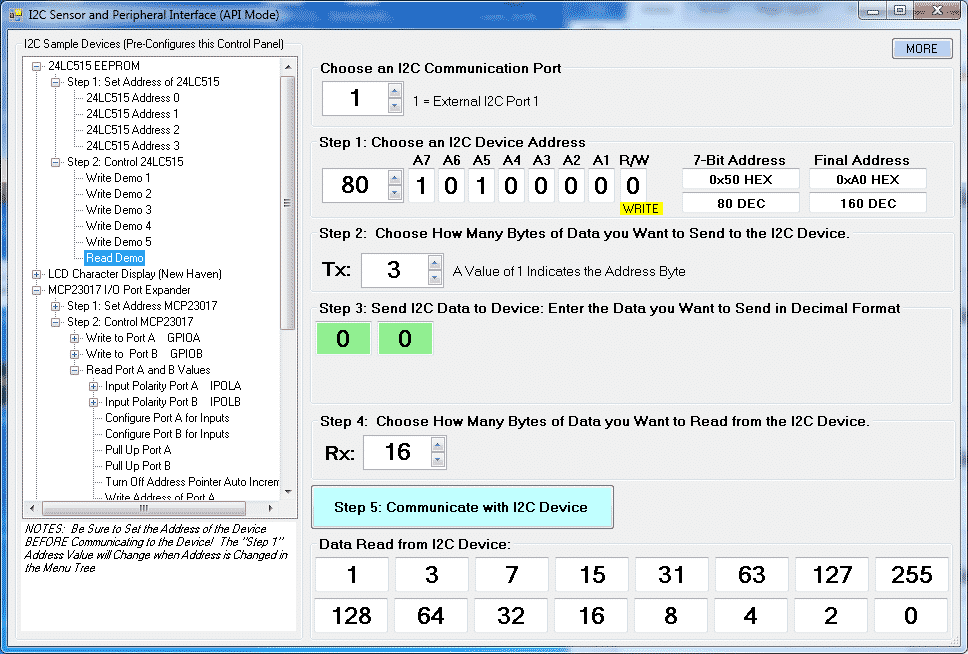 This option lets you choose the I2C communication port you will be using.  Most of the time, you will be using Port 1 as shown, Port 0 is typically reserved for use by NCD devices that include integrated I2C peripheral devices.  Port 0 may at times be available to the user depending on controller model.

The I2C device address is the most important byte of the I2C communications protocol.  This address is always indicated in the datasheet for your I2C device.  In an effort to assist customers, the I2C address of know devices is shown in the left menu tree.  Simply choose the I2C device you would like to communicate with, and select the address choice indicated in Step 1 of the menu tree.

If you are setting up communications with an I2C device not shown in the left menu tree, click on the A7-A1 boxes, as well as the R/W box to set the bits.  The 7-Bit Address and Final address are indicated (data sheets tend to show one or the other type of address which may or may not include the R/W bit).

Step 2: Choose How Many Bytes of Data you want to Send to the I2C Device

Keep in mind, when communicating with an I2C device, you have to send at least 1 byte of data (which includes the address shown in step 1).  For this reason, the minimum number of bytes you can send to an I2C device is 1.  Additional bytes are often used to indicate memory locations and data that is to be written to an I2C device.

Each box should be filled with a decimal value from 0 to 255 (hex is not yet supported).  The data sheet of your I2C will indicate the data that should be sent.  Most I2C devices use the next few bytes to indicate register addresses inside the I2C device, and sometimes include data write to the selected address registers.

There is only one Fusion command to learn for complete implementing I2C communications.  There can be many variations on the use of this command, but the format is always the same.  Because of the complex structure, the command will not be shown in our usual way.  Instead, we will list every byte with a description of its purpose and implementation.

Byte 4        0-255 Byte 4 is the beginning of all data that is sent to the I2C device.  All data to be sent to the I2C must be included here.  The first byte must always be the I2C Start Address (see below for a complete explanation).

Last Byte   0-75   The last byte of the command must contain the number of bytes to read from the I2C Device.

To better understand the I2C Start Address and how we have implemented it, let’s dive in to the MCP23008, a very common digital I/O chip from Microchip.com.  This chip has a start address of 0x20, according to the data sheet, so now we will convert this start address to a start address that is usable for NCD devices:

We will multiply this start address by two (this will effectively shift the data 1 bit to the left):

Subsequent bytes may be sent to the MCP23008 according to the address registers as shown in the data sheet.

Response from a Fusion Controller

It is possible to receive many types of responses from NCD controllers when speaking to a I2C device.  For instance, 85 will be received if the NCD controller has successfully transmitted data to an I2C device, but this response is only valid if you are NOT reading any data from an I²C device (Last byte of the transmission is Zero).  If you are reading data from an I2C device, then the response should contain the data bytes you are expecting from an I2C device.  If an error occurred during I2C communications, an Error Code will be returned.

Fusion firmware tries to provide you with clues as to why your command was not accepted by an I2C device.  However, it should be stated that not having a device connected, using the wrong address or port number may also trigger these error codes.  Fusion firmware will return the following error codes if there is a problem communicating with an I2C device:

This error is generated when a I2C Device does not acknowledge a command.  Typically, this error occurs later in the serial stream, and usually indicates command parameters or memory locations are not properly set.

Fusion I2C firmware supports clock stretching, which allows I2C devices to hold the clock line during the time it takes to measure sensor data.  This error code is generated of an I2C device takes too long to respond (1 or 2 seconds is too long for an I2C device).

The following examples will demonstrate a successful transmission to a MCP23008, controlling most of it’s various operations.  This is a ideal learning chip for I2C communications, as it is low cost and easy to understand.

NOTE: We have many more examples available, please see Software Tools below.

As of 5/9/2018, there have been a few updates to NCD USB to I2C conversion devices.  The following update information applies to the devices shown below ONLY:

Please note that NCD offers Free firmware upgrades, simply return your device to us and we will program it with the latest firmware.
Optionally, you may purchase new controllers and return your old controllers to us for a credit.

PLEASE NOTE THAT ALL COMMANDS SHOWN BELOW MUST BE WRAPPED IN NCD API PACKET STRUCTURE!

Send the following byte structure to the controller to easily send data to the I2C Port:

The following I2C Bytes can be used to control a PCA9536.  In this example, we will use the NCD I2C Buzzer Mini Module to turn the buzzer on and off.

The above commands are found in the PCA9536 datasheet, and are frequently shown in Hex Notation

0x03 Byte 5 of NCD API Packet is Payload Byte 3, Indicating to the Port Direction of the PCA9536

0xB0 Byte 7 of NCD API Packet is a Checksum Equal to the 8-Bit Sum of Payload Bytes 1 through 4 above.

In a more simplified format, sending the following data will control a Buzzer connected to the PCAp536.  The first command is used to set the Port direction of the PCA9536 to Output Mode.

The following command will turn on the Output of the PCA9536.

The following command will turn off the Output of the PCA9536.

Receiving data from I2C Devices works in exactly the same way as sending data, except the command header has changed and the number of bytes you would like to read must be specified in a parameter.  If it is necessary to set a pointer before a read operation, please use the I2C write command above to move the pointer, then use the I2C read command to read data from the I2C device.