This manual is divided into the following sections:

Introducing NCD’s Long Range IoT Wireless Two Channel Counter, boasting up to a 28 Mile range using a wireless mesh networking architecture. It incorporates two low latency counters that never miss a pulse even during sleep. The device normally sleeps during no activity. If a pulse arrives at either input, it wakes up, counts it and if the number of pulses counted is a multiple of Counting Threshold then it sends a packets with the total number of pulses detected on both channels until then.

Afterwards it goes back to sleep. It also wakes up periodically after user defined delay and sends latest number of pulse counts on both channels. Thus with both functions it maximizes power efficiency.

Powered by just 2 AA batteries and an operational lifetime of 500,000 wireless transmissions, a 10 years battery life can be expected depending on environmental conditions and the data transmission interval.  Optionally, this sensor may be externally powered.

With an open communication protocol this sensor can be integrated with just about any control system or gateway.  Data can be transmitted to a PC, a Raspberry Pi, to Microsoft Azure® IoT, or Arduino. Sensor parameters and wireless transmission settings can be changed on the go using the open communication protocol providing maximum configurability depending on the intended application.

The long range, price, accuracy, battery life and security features of Long Range IoT Wireless Two Channel Counter with Reset makes it an affordable choice which exceeds the requirements for most of the industrial as well as consumer market applications.

To complete a network with an industrial sensor at one end, a Zigmo/Router is required at the receiving end (PC end) that receives data from sensor. A set of sensor and Zigmo is shown in following figure. 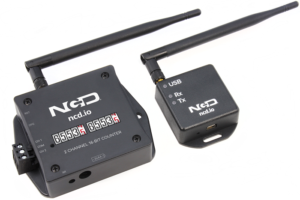 The sensor and Zigmo/Router come pre-programmed and work out of the box. In this section we will setup a sensor and Zigmo link and start receiving data on our PC. Though this guide shows how to visualize data on LabVIEW utility, you can also use a simple serial terminal to see raw data by following these steps.

At this stage, both the Sensor and Zigmo have automatically established communication and the data can be read from the serial port at which Zigmo has been installed.

Once the sensor resets it will start sending a frame every 600 seconds after factory reset.

Please refer to the detailed document available to Digi website to understand X-bee communication parameters and its operation mechanism.

Sometimes a changed setting at Zigmo end, whether intentional or unintentional, can cause a network failure and no data reception at PC end. To fix this issue when the sensor end is operating at factory default settings you will have to bring the Zigmo/Router to factory default settings as well. For that, please download the configuration file for Zigmo from our website. You will also require XCTU utility provided by Digi.

After installing XCTU Utility, run it and go to add a radio module. Select the serial port at which Zigmo is connected and press finish. This will connect the Zigmo to XCTU.

Now press the write button on top to write these parameters. Close the XCTU utility and open the LabVIEW utility and follow the steps in getting started section to communicate with sensor. 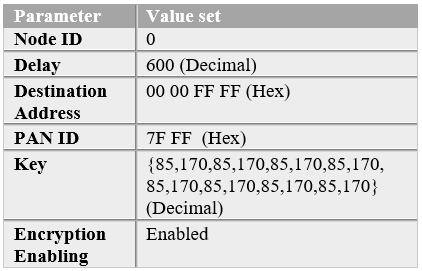 This module incorporates 2 modes of operation, these are

Run mode is the standard mode, the module will always enter Run mode if no button is pressed during Power-up/Reset. Configuration mode is intended to configure sensor parameters and the X-bee parameters on the sensor end. Note that the Sensor end X-bee is only configurable via the sensor controller using the commands provided in device manual. Figure 7 illustrates these modes.

The device sends a startup packet which can be used to determine the mode in which it is operating. These packets are shown in Table 2.

Note that settings only take effect after the reset.

Frame Communication at Power up

In figure 8,  Mode bytes highlighted in red can be compared with the values provided in Table 2 to determine the mode in which the sensor is operating. Node ID is the ID of the given sensor while sensor type determines the type of sensor. Both of these can be used to determine the exact sensor which is sending the information.

A shown in second column in Table 2, the sensor configures its PAN ID automatically depending upon the mode it is working in. During factory reset it sets the PAN ID to the value given in table therefore the factory reset frame will only be received if your Zigmo/Router PAN ID matches this ID. Please note that right after factory reset the sensor enters configuration mode therefore its PAN ID is changed again and a new frame is generated. All 3 type of frames are shown in Figure 9, Figure 10 and Figure 11.

The factory default settings are shown in Table 1. For parameter description please refer to the section on configuration. 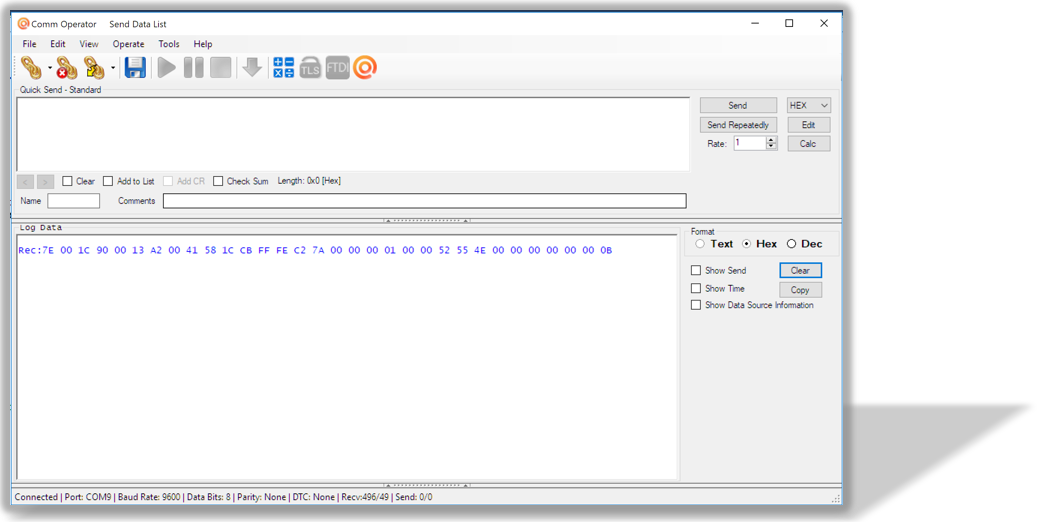 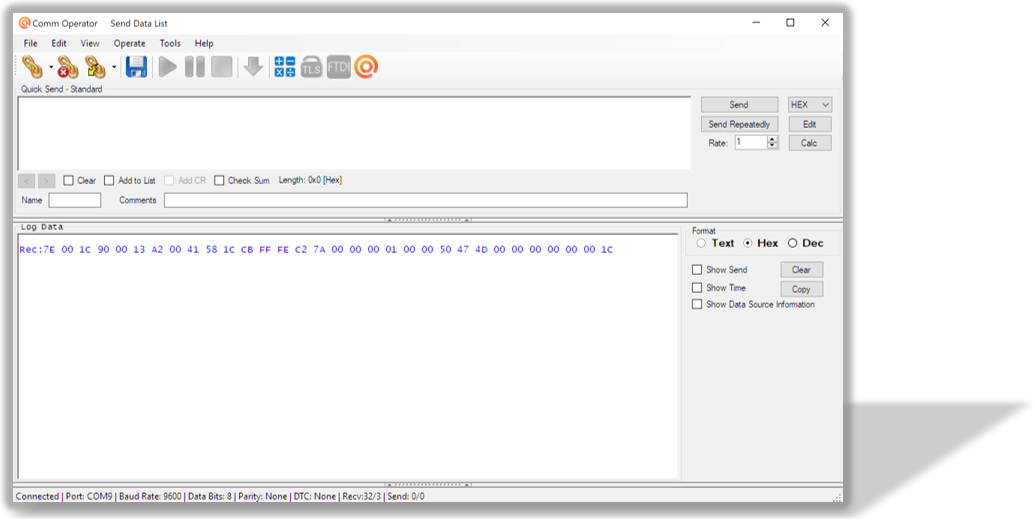 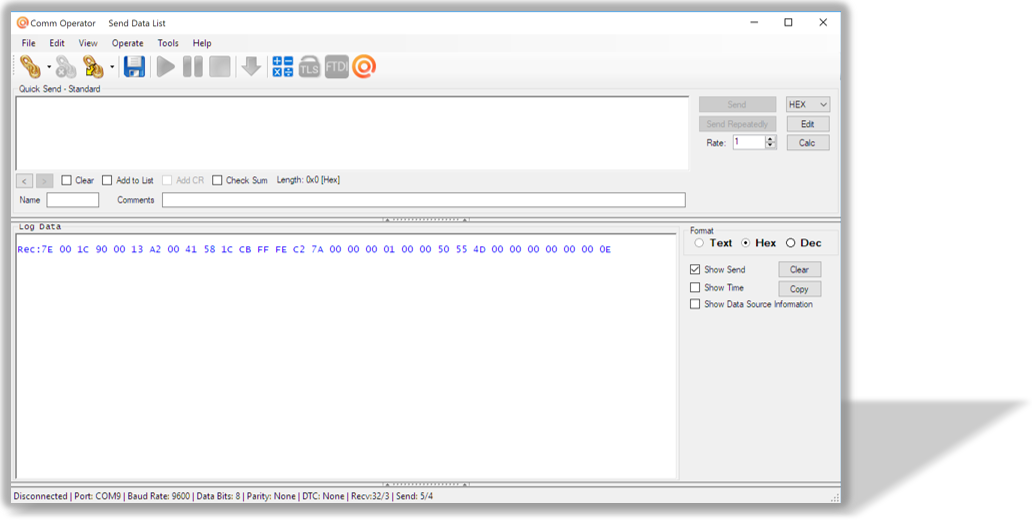 Run mode is the default mode of operation of this sensor. In this mode the sensor sends periodic packets to destination receiver. During the time it is not sending packets, it sleeps and conserves power. Sensor end X-bee operates in API mode and sends packets to the saved destination address on the network specified by the saved PAN ID. Figure 12 illustrates an API packet transmission and reception.

Packet reception at receiver end is ensured by the device by retrying up to 3 times if no acknowledgement is received that the packet has been successfully received. The device uses the acknowledgement functionality available in API mode in X-bee devices therefore user does not need to worry about sending acknowledgements for every packet.

The detail for API packet received at PC end can be read from the X-bee manual available from Digi. The detail of Payload section of packet is shown in Table 3.

The detail for API packet received at PC end can be read from the X-bee manual available from Digi. The detail of Payload section of packet is shown in Table 3.

Figure 14: Run mode packets being received in our free to use LabVIEW utility (For custom made utility for your specific requirements please contact support)

Configuration mode is intended to setup the device over the wireless link. Entering configuration mode was already explained in the section “mode selection procedure”. User can also setup X-bee communication and networking parameters using this mode via PC. Note that settings only take effect after reset and are stored inside the device.

In configuration mode, the device sets its X-bee pan id to 7BCD (Hex). Also, the destination address used by the sensor is extracted from the incoming packet (source address). This ensures that once you put a device in configuration mode you just need to change the PAN ID of your Zigmo to match with sensor and start configuring your device. You can change the PAN ID of your Zigmo using XCTU from Digi. If you use our LabVIEW utility, it will automatically change Zigmo PAN ID once you open the configuration window. When you exit this window your PAN ID will be restored to old value.

A standard configuration packet and its fields are explained in Figure 15. Its possible responses are also shown. The commands supported by this sensor are shown in Table 4, these can be used in the Parameters field of Payload section. The sensor responds to these commands with an acknowledgement if the process completed successfully or with an error if it failed to setup a parameter. The respective Data and Reserve section length and values are shown in Table 5 for the case of acknowledgement. In the case of error, the reserved section will be fixed and not used, while the Error number byte will determine the type of error returned. These errors are mentioned in Table 6.

Figure 15 depicts standard communication between Zigmo/Router and sensor. Sensor commands have variable length frames whereas responses received from sensor are fixed length. The 2 scenarios are also shown, where a command can result in an acknowledgement reception or an error reception at the Zigmo end.

Examples for setting parameters in configuration mode are shown in Appendix A. 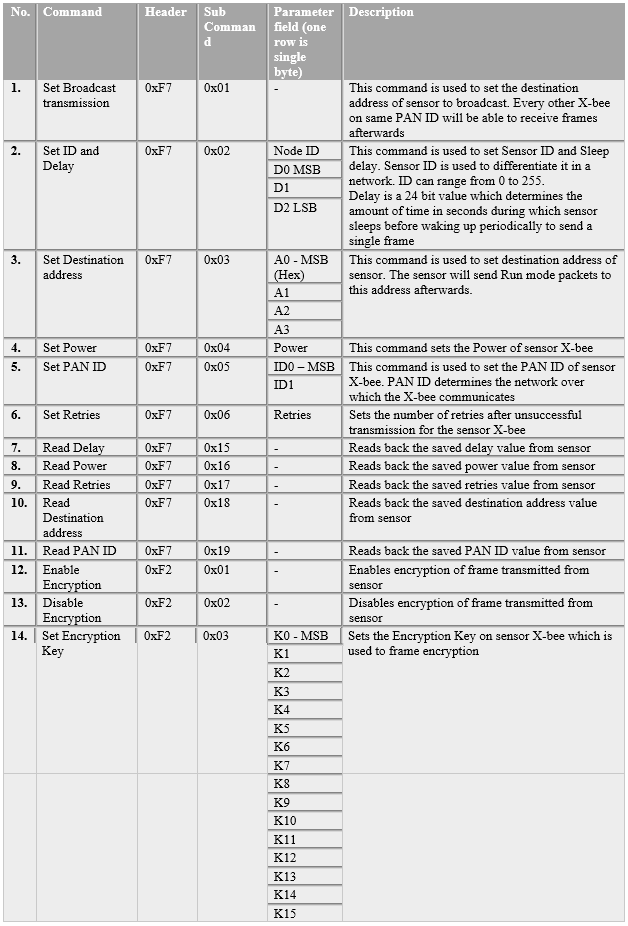 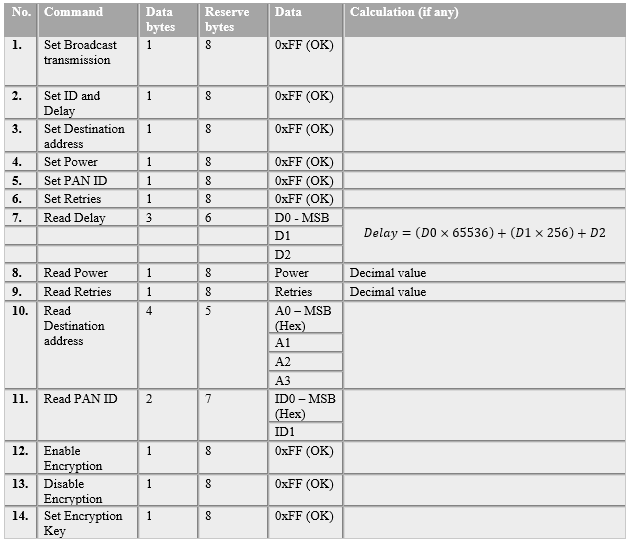 Table 5: Acknowledgment data for various commands and the size of reserve section in each case 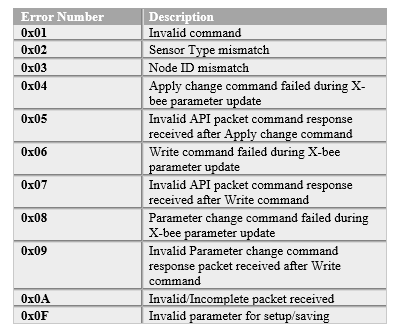 Table 6: Error numbers and their description